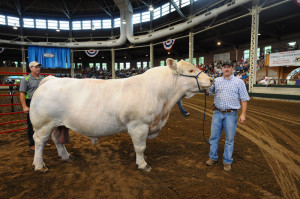 Craig Salcup and second place Super Bull “Chubbs”. An animal raised on a farm in the Atlantic region has won the title of “Super Bull” at the Iowa State Fair. Sampson is a three-year-old Red Angus bull who weighed 2,893 pounds. Sampson grew up on Alan and Brenda Zellmer’s farm near the Atlantic. Twenty-two-year-old Gage […]