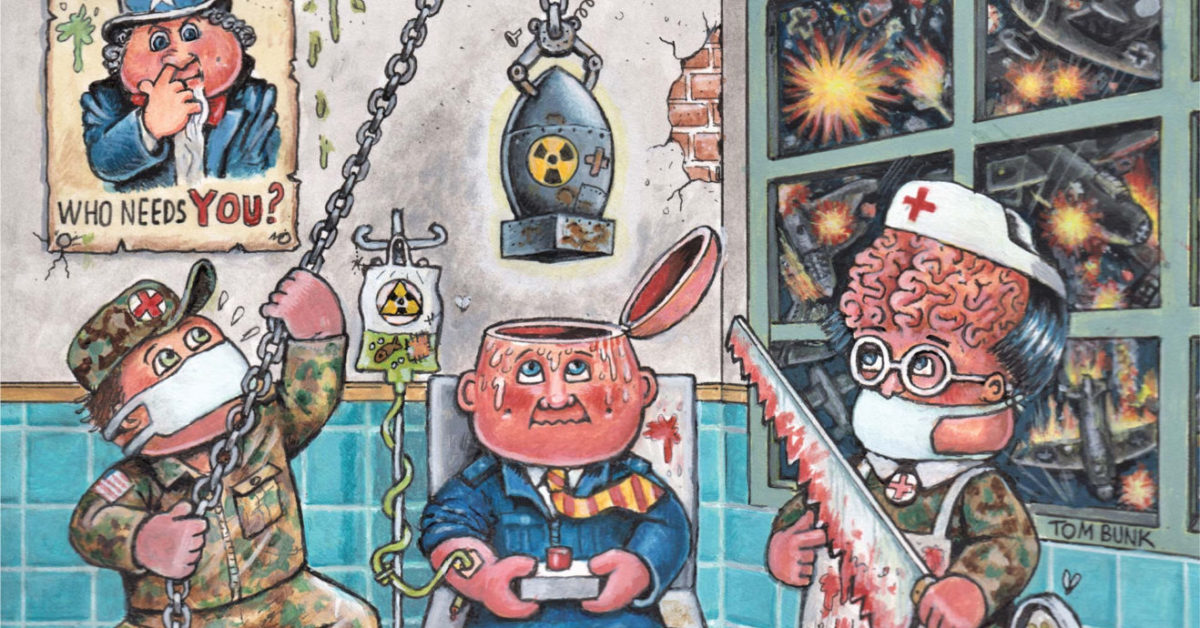 Clearly, this is a story that has been hurting for years to be told. What is the origin of the Garbage Pail Kids? Well, Dynamite Entertainment is going to release this story in comic book form in October, from The Goldbergs‘ creator Adam F. Goldberg, next to Hans Rodionoff and Jeff Zapata. But unfortunately, it is not the person who gave the Children’s garbage bucket their origin.

Because the 1985 trading card/sticker series that parodied Cabbage Patch Dolls and became a source of controversy for their satirical and crude nature, was actually created by the Pulitzer Prize-winning comic book creator of Maus, Art Spiegelmann, which came up with the idea at Topps after the success of its previous designs Garbage Can-dy and Wacky Packages. Art Spiegelman, seriously.

The iconic Garbage Pail Kids date back nearly 40 years and have been a colorful and beloved cast of characters for trading card collectors and other media, including comic books. Each GPK is distinguished by a gross, horrible, or downright bizarre appearance, abilities, or situation. But in all these years, the stories of how these kids became who they are have never been revealed to fans. So far…

The crazy minds of Adam F. Goldberg, Hans Rodionoff and Jeff Zapata have joined forces to bring everyone the Garbage Pail Kids like they’ve never seen them before, flipping the table with a barrage of huge reveals. Chronicled in the style of a sprawling superhero epic, not only will the curtain be drawn on the origins of these unique “heroes”, but there’s a wild surprise at the heart of this story. Adam Bomb and his allies contributed to the outcome of World War II and the fate of mankind itself! Other fan favorites include Roy Bot, Brainy Janie, Snooty Sam and many more!

The first issue begins with Adam Bomb’s debut as an unassuming, flat-footed soda jerk. Then, thanks to an unfortunate radiation leak, he transforms into the All-American superhero he’s known to GPK fans around the world. He’ll have to assemble a team of other “enhanced” trash kids to take down the Axis of Evil with Nasty Nick at the helm. Readers can expect to catch up with some of the biggest stars in the GPK world, as well as keep an eye out for some cult favorites thanks to the dedicated creative team’s passion for the property.

Much of the initial genesis of the origins concept can be traced back to the ideas and illustrations of artist Jeff Zapata. He has worked in the comics and trading card business for over 25 years, nearly half of which as editor, art director and artist on Garbage Pail Kids and other Topps franchises. His drawings alluding to these original ideas went viral among the fanbase, spread like wildfire, and eventually brought this project to life. For this series, Zapata handles art direction, contributes art, and helps develop the story. He is joined by Chris Meeks on artwork throughout the series.

He’s joined by a powerful pair of experienced, top-notch writers in Adam F. Goldberg and Hans Rodionoff. Goldberg, also known for his film and television production, is the eponymous man behind the hit show The Goldbergs which is in its 10th season. He also worked on How to Train Your Dragon, Monsters vs. Aliens, the brand new Muppets series and past GPK contributions. Rodionoff is known for his historical fiction retelling of HP Lovecraft for Vertigo, Lost Boys, and his collaborations with Goldberg on Muppets and a new Damage Control series for Marvel.

“One of the most vivid memories from my childhood is walking into my second grade classroom to find everyone gathered around a filing cabinet. And in that filing cabinet – Garbage Pail Kids,” shared Adam F. Goldberg . “As the class clown, I was immediately hooked on the gallows humor and crude gags.”

“This idea has been a personal project of mine for years,” said Jeff Zapata. “This project is the perfect set of talents collaborating to realize a shared vision of doing something wild and different with a classic brand.”

“I think what’s exciting to me is that this book will hopefully entertain diehard fans, but could also be the first GPK book that people who aren’t already fans of the universe will resume and it will open their minds to the wonderfully bizarre world of Garbage Pail Kids,” said Hans Rodionoff

“Adam F. Goldberg, Hans Rodionoff, Jeff Zapata and the rest of the creative team on this project are so talented,” said Nick Barrucci, CEO and Publisher of Dynamite. “They know, understand and appreciate these characters so much and are perfect for bringing this origin story to life. In 40 years, this story has never been told before, and we at Dynamite are thrilled to be the company to do it. !”

In the style of the original trading cards having variations A and B, the first issue features variant covers by artists Ray Lago, Tom Bunk, Jeff Zapata and a presentation of one of the classic trading card images.

Seriously, someone is at least asking Spiegelman to do a cover… Garbage Paul Kids: Origins #1 will be released in October.