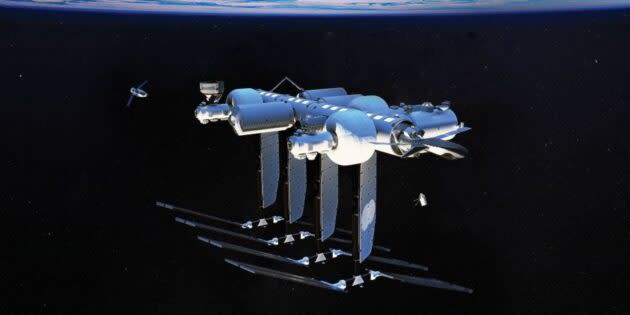 Amazon and its cloud computing division, Amazon Web Services, announce they are partnering with another company founded by Jeff Bezos to support the development of a commercial space station known as Orbital Reef.

Bezos’ space company Blue Origin is one of the leaders of the Orbital Reef project, along with Colorado-based Sierra Space. Boeing, Redwire Space, Genesis Engineering and Arizona State University are also part of the consortium.

Last December, Orbital Reef won a $130 million prize from NASA to move forward with the design of an orbital outpost that could fill the void when the International Space Station is retired in 2030. -2031. Two other teams – led by Nanoracks and Northrop Grumman – have also secured funding from NASA to flesh out their space station concepts.

In a blog post, AWS said it will provide technology services and tools to support the development of Orbital Reef, from the technical design phase through networking and in-orbit operations. Amazon would bring its logistics expertise to streamline the delivery and inventory management of space station supplies.

“Amazon and AWS are ideal collaborators to support transportation, habitation, and communication,” said Brent Sherwood, senior vice president of advanced development programs for Blue Origin. “We are working with the best in the world to rethink the logistics of a mixed-use retail business park.”