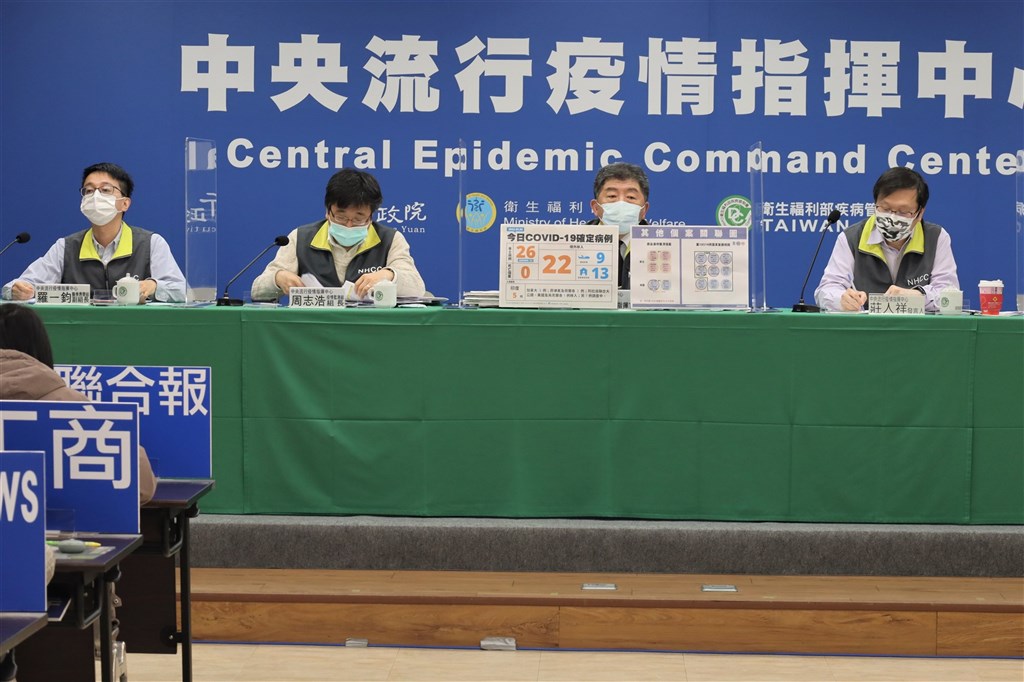 Taipei, Feb. 8 (CNA) Taiwan reported 26 new domestic cases of COVID-19 on Tuesday, 22 of which were linked to previously reported clusters and four whose source of infection is unknown, the Central Epidemic Command Center said ( CCCB).

The 22 cases are all related to clusters registered and tested positive in quarantine, Health and Welfare Minister Chen Shih-chung (陳時中) said at the CECC press briefing.

Of these, 16 were reported in Taoyuan, including seven employees of the Farglory Free Trade Zone, six of logistics company Re-Yi Distribution Service Co., owned by FamilyMart, and three are linked to a cluster surrounding a hotpot restaurant and a kindergarten in the city’s Baden District, Chen said.

Infections in all five groups involve the highly transmissible Omicron variant of COVID-19.

The other four cases reported on Tuesday are a family of four — a father, mother and their two daughters — who live in New Taipei’s Banqiao district, CECC official Lo Yi-chun (羅一鈞) said.

The family’s youngest daughter, who is in her 20s, tested positive after showing symptoms, and her three family members, who have been asymptomatic until now, also tested positive later, said Lo.

Further testing is needed to determine who in the family was infected first and how they contracted the disease, Lo said.

The eldest daughter in the family is employed at Deloitte Taiwan and she worked at the company’s office in Xinyi District in Taipei from Friday to Monday before testing positive, according to a notice posted on the company’s website. business.

His close contacts at work are under quarantine and others who worked on the same floor will be tested for COVID-19, the notice said.

Among the new domestic cases reported on Tuesday, sixteen had received two doses of the COVID-19 vaccine, three had received a vaccine injection and six of them, all under the age of 10, had not been vaccinated.

The vaccination status of one case is still under investigation, the CECC said.

Besides the domestic cases, Taiwan also reported 22 imported cases on Tuesday, nine of which tested positive upon arriving in Taiwan on Monday. The CECC has not published any information regarding the vaccination status of the imported cases.

To date, Taiwan has confirmed 19,239 cases of COVID-19 since the pandemic began in early 2020, including 15,228 locally transmitted infections.

With no deaths reported on Tuesday, the number of confirmed COVID-19 deaths in the country remained at 851.

February 4: Half of 25 new national COVID-19 cases in Kaohsiung: CECC