Hoo Smart Chain launched “Cosmic Origin Project”, following in the footsteps of several other blockchain ecosystems. HSC will encourage and focus on projects that can bring liquidity and more activity, while expanding the usefulness of the HOO token. After cultivating a vibrant ecosystem, Hoo Smart Chain’s longer-term goal is to create a visual metaverse.

The blockchain industry has grown from a single, dominant monolith that is Ethereum to flourishing into multiple dynamic ecosystems. Over the past year, new high-performance blockchains such as Avalanche and Fantom have launched with attractive reward programs and grants, appealing to both developers and users.

Developers can go to the official website https://www.hoosmartchain.com to learn more about the Cosmic Origin project, or register directly at http://hk.mikecrm.com/NtPoo5v. Developers are also welcome to discuss and exchange development ideas within the official developer Telegram Group https://t.me/HooSmartChainDeveloperGroup. Hoo Smart Chain will provide all qualified projects with an appropriate amount of gas fee support for testing and development.

On March 9, Hoo Smart Chain officially launched “Cosmic Origin Project”, developers around the world can register through the following channels: website, posters and twitter. Cosmic Origin Project rewards will be activated once the number of registered projects reaches 60. The first phase of the project will last for six months from the date of activation. The second phase will be announced in the second half of 2022. All projects will be deployed and live on Hoo Smart Chain at two fixed time slots each month.

The blockchain landscape has gradually changed, since the monolithic dominance of Ethereum, various new high-performing players have entered the fray and created their own dynamic ecosystems.

Over the past few years, several emerging blockchains have introduced incentives to boost their appeal, including the Ethereum sidechain SKALE, with a $100 million ecosystem incentive plan. Kava Network launches 「Kava Rise」, a $750 million on-chain developer incentive program designed to bring innovative DeFi, GameFi, and NFT developers to the Kava Network. Previously, Polygon, Avalanche, Fantom, NEAR, and others each launched a multi-billion dollar on-chain reward system, and almost certainly, these rewards have enhanced the growth of the ecosystem’s on-chain activity.

Hoo Smart Chain also recently launched a rewards program to promote ecological prosperity after rolling out its mainnet in May last year. More details about the “Cosmic Origin Project” can be found on the official website of Hoo Smart Chain.

The TVL reward plan is for all on-chain projects, Hoo Smart Chain Foundation will calculate the net TVL of each project in USDT and the reward is based on set TVL levels.

Hoo Smart Chain has created a rewards calculator on its official website to make it easier for project partners to calculate their rewards. For example, if a project reaches 1 million USDT TVL based on random monthly snapshots, it will receive a standard A base reward of 10,000 USDT. If the project’s TVL continues to maintain a TVL of 1 million USDT for the following month, it will be eligible for an ongoing monthly bonus B of 4000 USDT. The amount of Standard Base Reward A and Monthly Ongoing Reward B increases with each TVL level.

The trading volume reward is mainly for GameFi and NFT on-chain projects. It is also based on a standard base reward A and a monthly ongoing reward B.

For example, an NFT project with a monthly trading volume above 5 million USDT will receive a base bonus of 6,000 USDT. If they maintain this transactional volume the following month, they will receive an ongoing bonus of 3000 USDT.

The HOO staking reward is designed to provide additional incentives for projects that expand the application of the HOO token. Besides rewards A and B above, this part of the reward will provide additional rewards based on the number of HOOs staked. For example, if a project’s TVL reaches 1 million USDT with more than 100,000 HOO staking in the project, except for the standard A award of 10,000 USDT, the HOO staking bonus will be 10 %. The bonus also applies to monthly continuous reward B. The bonus can increase for each level, with up to 30% bonus after 1 million HOO and a 100% bonus for the highest level.

According to the Hoo Smart Chain website, “Cosmic Origin Project” will accept applications on March 9 and will continue to be open to developers worldwide to enter through the website, posters, and Twitter. “Cosmic Origin Project” will be activated until it has 60 projects applied. The first phase will last six months and the second phase will be announced later this year. After the launch of the program, all deployed projects will be online at two fixed time slots each month. Currently, a project can register via the link on the official website. Community leader Hoo Smart Chain said one person goes fast, but many can go further together. “We want to provide the project with the right environment to realize its potential and foster an innovative ecosystem together.”

Hoo Smart Chain promotes the construction of the metaverse blockchain

With the growth of the Hoo Smart Chain ecosystem, together with the “Cosmic Origin Project” and the expansion of the HOO token application utility, both pave the way for the ultimate goal of HOO Smart Chain. Four months ago, Hoo Smart Chain announced the start of a new journey to build the metaverse and create a visual blockchain.

Hoo Smart Chain chooses to invest on the metaverse, it seeks to differentiate itself in the highly competitive blockchain space and embodies Hoo Smart Chain’s view on industry trends. Hoo Smart Chain believes that DeFi applications on various blockchains are becoming more and more homogeneous and static, and the growth of the blockchain ecosystem requires iterative innovation of the underlying technology, so it chose to build a network of interconnected blockchain. 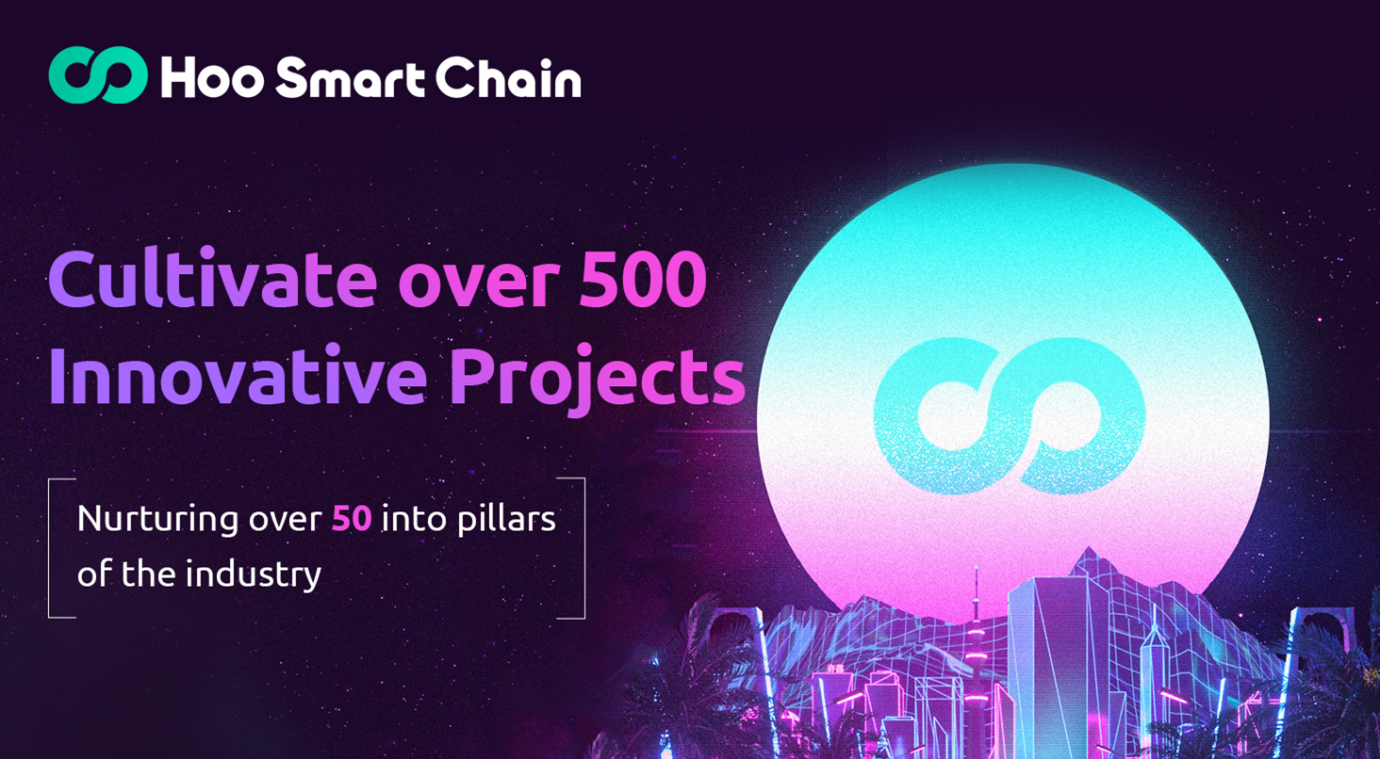 Hoo Smart Chain believes that the most important technology to build the metaverse is blockchain technology, because in this virtual space, everything from the creation, exchange and consumption of value takes place in the digital world, where people can play, create, entertain, display, socialize and transact. Among them, user asset management, identity, security and other crucial issues need to be solved using blockchain technologies.

“Based on this goal, Hoo Smart Chain is not just following a popular trend in building the metaverse blockchain,” said the community leader of Hoo Smart Chain. “Hoo Smart Chain aims to provide a decentralized settlement platform and value distribution network with transparent enforcement mechanisms to secure virtual assets and user identities.”

In line with this vision, Hoo Smart Chain will develop the metaverse in four stages: Visual Blockchain, 3D Blockchain, Social-Fi Interactive Blockchain and finally the metaverse. In the current visualization phase, it attempts to visualize the string data and animate the ecology.

At the stereoscopic, interactive, and metaverse stages, Hoo Smart Chain will combine on-chain interactions with the life trajectory of users. For example, users can enter a virtual bank in a 3D environment when using loans and financial management agreements, and users can enter a virtual supermarket when purchasing goods. Based on this, the concept of SocialFi will also be introduced to improve the interconnectivity of the ecosystem. In its final phase, Hoo Smart Chain will combine innovative technologies such as virtual reality to create a more immersive, interactive and visionary chain world.

The blockchain master plan of the Hoo Smart Chain metaverse is indeed intriguing. But based on the present, it still has to undergo ecological growth, application innovations, technological breakthroughs and various other challenges. This means that Hoo Smart Chain needs to take several steps to achieve its vision. Community leader Hoo Smart Chain said the launch of the “Cosmic Origin Project” is just one small step towards the goal of the metaverse. “It allows developers around the world to directly experience the full range of development support by leveraging Hoo Smart Chain’s ecological infrastructure and capabilities, to jointly promote the chain’s ecological prosperity in a positive-sum game.” .

Do you think the Hoo Smart Chain metaverse plan can be realized?