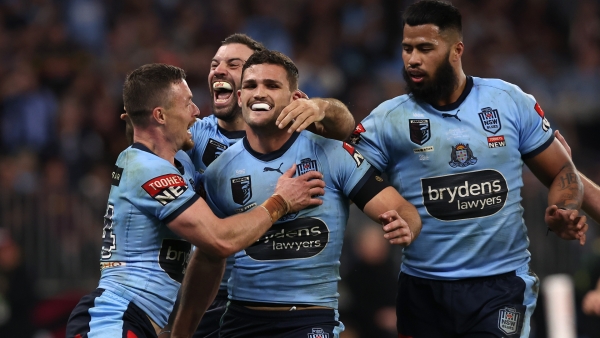 Queensland emerged victorious from a thrilling series finale to reclaim the Home State Shield in a thrilling 22-12 win over New South Wales in Brisbane on Wednesday.

The Maroons looked in danger of sliding to a fourth series loss in the last five in their own backyard, after the Blues handed them a blowout defeat in Perth for Origin II following a narrow victory in Sydney in Origin I.

But in one of the great modern deciders in series history, hosts injured Billy Slater held on in the final quarter of a deadly encounter to win at Suncorp Stadium in Origin III.

Both teams lost players to injury early on, with New South Wales’ Cameron Murray and Queensland duo Selwyn Cobbo and Lindsay Collins all sent off with head injuries in the opening five minutes.

Despite losing two men, the Maroons still struck first through Valentine Holmes’ dart in the 12th minute, although the Penrith Panthers halfback combo of Nathan Cleary and Jarome Luai quickly combined for a response from the Blues six minutes later.

Debutant Jacob Saifiti crossed after repeated sets to give the visitors the break leading nine, but Queensland cut the deficit to two before the interval after Kurt Capewell pounced on a sublime grubber Harry Grant.

A moody start to the second half saw Dane Gagai and Matt Burton both doomed to dust, before Ben Hunt helped quell a Blues resurgence with a stunning 40-20, setting the stage for a string of repeated sets. finished by Kalyn Ponga.

Grant looked to have potentially sealed the deal for the Maroons with a dozen minutes left, only to have the bunker chalk it out – but when Hunt picked up a final Cleary chip to run the length of the pitch with two minutes to go, the release of emotion around Brisbane ensured it would be remembered as one of the series’ all-time encounters.