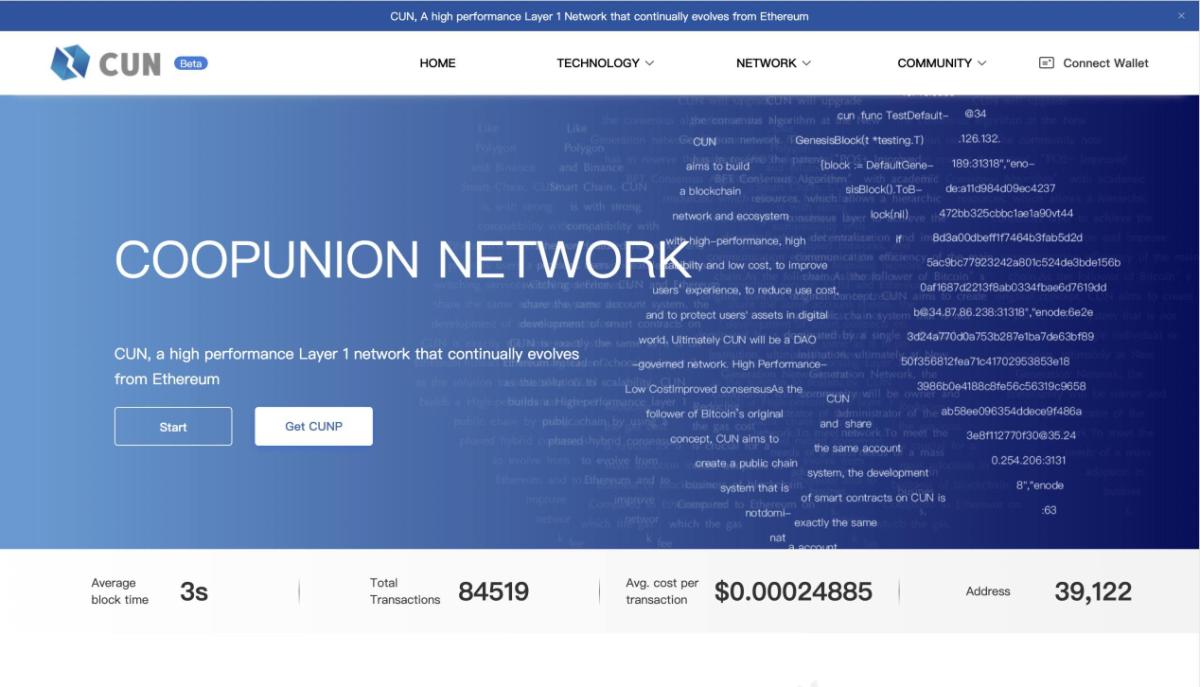 NEW YORK, NY/ACCESSWIRE/February 23, 2022/ On February 23, 2022, Coopunion Network (CUN), the Layer 1 network with the Coin mainnet, launches its new beta website www.coopunion.net marking the official start of CUN evolving from the first stage of Origin Network to the second stage of the Cape of Good Hope Network.

Coopunion Network, a distributed network infrastructure that evolves from Ethereum, aims to build a high-performance, high-security, and low-cost network and blockchain ecosystem to improve user experience, reduce costs, and protect assets. users in the digital world. Ultimately, CUN will be a DAO-governed network.

In August 2020, a group of researchers and developers from the blockchain industry, who strongly believed in the philosophy of Bitcoin and expected a better user experience, transparent and at a lower cost on Web3, decided to build a new public chain network by improving and evolving from Ethereum. .

As a hands-on project, CUN is taking the phased mixed consensus path and will gradually improve and iterate Ethereum on network performance, security and privacy, asset decentralization, cross-chain interaction, and more. CUN has introduced PoA consensus as access mechanism in the first stage (Origin Network), will adopt PoS + PoA in the second stage (Cap of Good Hope Network) to achieve issue voting as access consensus, and in the third stage (New Generation Network), the network consensus will shift to PoS+PBFT.

The Mainnet Coin refers to the Coopunion Network Point, or CUNP for short, which is used to pay the CUN network gas fee. It is also the perpetual certificate that quantifies user contributions. Joining the CUN community or becoming nodes or developers are all subject to rewards with CUNPs.

CUN is currently in the process of moving from the Origin network to the Cape of Good Hope network, offering the same performance as BSC and Polygon. It will gradually improve in the second and third stages. Various Dapps will be generated to practice the spirit of blockchain and contribute to business success in the era of Web 3.0. At the same time, in terms of community governance, CUN will gradually become a DAO-governed network at the next-generation network stage.

At present, except the official website, CUN also has a presence on a number of social media including Medium (Coopunion Network), Twitter (@CUNFans), Telegram (CUN Community) and Discord (Coopunion Network ) to allow users to learn more about the CUN and join the community. As a network that aims to achieve DAO governance, CUN attaches great importance to user participation and support. CUN invites all users who believe in blockchain and DAO to unite to create a better Ethereum network.

See the source version on accesswire.com:
https://www.accesswire.com/690003/Coopunion-Network-Upgrades-from-the-Origin-Network-to-the-Cape-of-Good-Hope-Network–the-New-Official-Website-is -In line