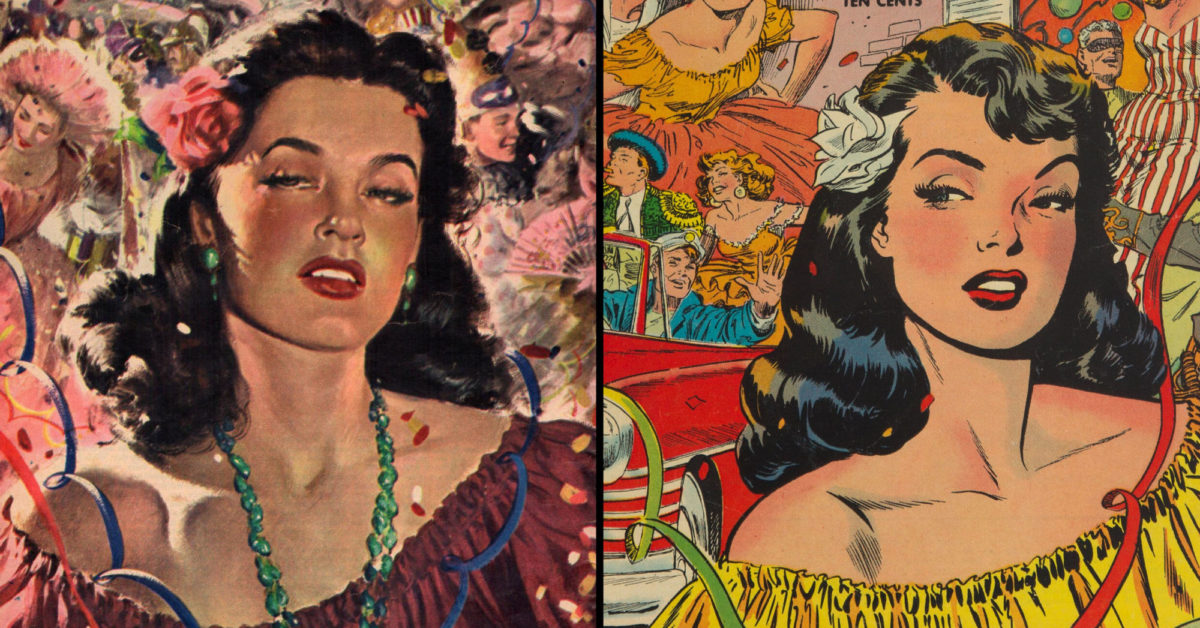 Matt Boulangerthe cover of Cinderella Love #25 (St. John, cover dated December 1954) is considered one of his finest cover art, and it’s easy to see why. A fun and festive theme, a budding romance in the background, and a beautiful woman in the foreground who clearly has something on her mind. Like a lot of Baker artwork, it’s a cover with a story to tell, and with those party streamers raining down, it really does feel like love is in the air here. This issue has become one of the most sought-after romance comics and is also high on Baker’s collector’s list. In January 2022, a CGC 4.5 copy sold for the incredible sum of $17,400.00. The highest rated copy of the CGC Census to date is a CGC 8.0 and copies of this number do not change hands very often in any class. In recent years, the story behind this comic book romance cover has begun to materialize and has finally come to light. The image was largely inspired by an illustration painted in Liberty Magazine volume 24 #1, January 4, 1947 by artist Ernest Chiriaka. There is a copy of this magazine up for auction at The Matt Baker Showcase Auction August 11, 2022 #40190 at Heritage Auctions

The interest of comic book fans and historians in this famous Baker cover has thrown up some interesting surprises in recent years. In 2020, a copy of issue 534 of February 20, 1949 of the Greek magazine Θησαυρός (in romanized form: Thisavros, which translates to “treasure”) has emerged and features illustrations with several notable elements that are clearly very similar to Baker’s Cinderella Love #25 cover more than five years later. It’s a pretty obvious sweep, which in itself isn’t a shock. Throughout comic book history, this is certainly not an uncommon practice to varying degrees, and Baker was known for keeping a comprehensive reference file. As noted Frederic RobinsonBaker’s half-brother, interviewed for the essential reference, Matt Baker: The Art of Glamor:

Oh yeah, he had a huge magnetic file, and he was a voracious collector of reference material. He was going through magazines and cutting or tearing pages, and he really had quite a large folder of them, categorized and everything. If he needed references, all he had to do was open his file, and he could go straight there.

A copy of Thisavros #534 sold on eBay in March 2021 for an astonishing $1525.00 which would certainly seem to serve as confirmation of the power, appeal and popularity of the Cinderella Love #25 cover that the original source of this image helped to inspire.

But the existence of this cover image has raised obvious questions in a few corners of the internet: if this was Baker’s inspiration for the Cinderella Love #25 cover, where could he see a copy of this Greek magazine? And who was the artist? There have been three series of magazines named Thisavros published in Greece, the most famous and historically important was published weekly from 1938 to 1967 for 1482 issues of the publisher GI Papageorgiou, according to the Greek Comics forum, which seems to be the most authoritative source on the subject. The magazine was a mix of news, entertainment, fiction and comics.

A second apparent hit then surfaced involving a panel from a slice of the Flamingo comic created by Baker and Ruth Rockpublished on July 3, 1952, and the cover of Thisavros #710 from July 6, 1952. But the original version of this image was painted by Coby Whitmore for the story The lady and the tramp by Laurence Critchell in the April 26, 1952 issue of The Saturday Night Post. Given the popularity of Saturday night post and an earlier release date that seems timely to have inspired both Baker and the unknown artist of Thisavros #710 for their early July releases, it seems clear that Baker’s source of inspiration was a publication he could have found on a newsstand in any number of places (note: Baker lived and worked in Mexico for a some time during this period, although precise dates of his stay there are unknown). The scene painted by Whitmore is depicted in the opening paragraphs of Critchell’s story, which is a somewhat similar setup to the introduction of this moment in the Flamingo script.

And perhaps unsurprisingly, we now know that the images that appear on the cover of Thisavros #534 in 1949 and Cinderella Love #25 in 1954 also originated in the pages of a popular mainstream American magazine – in this case an issue of Freedom Review from 1947. The Thisavros #534 the cover appears to be a well-executed copy of the Freedom Review version, perhaps simply a copy of the original printed image retouched to make it suitable for reproduction.

The original version of this image was created by the painter Ernest Chiriacka for Freedom magazine volume 24 #1January 4, 1947, accompanying an account by the author James Aswell called Nocturnal Creole. As Chiriacka’s painting implies, the story is a tale of romance and drama set in New Orleans during Mardi Gras:

New Orleans seemed to sway gently to the orgiastic rhythm of Mardi Gras. Above the clumsy crowds, above the pink haze of flares, above the Zulu king grandiosely drunk on his jungle paint, above the rowdy debutantes on the chariot of the seven sins, above the dark wind and sad blowing a storm of confetti hearts down the canal On the street — before all this and more — things were happening in a hotel room.

They weren’t original things. A boy and a girl had gotten married that afternoon and started quarreling. For nothing and for all important things—like this character, Pierre had come to their table at Larabie’s and she had been too nice to him. As little as that, and as much.

St. John Publications acquired the title Cinderella’s Love (with titles romantic love, child, cowboy and Congo wild boy) from publisher Ziff Davis, and the title contained reprints of Ziff Davis material and early St John romance titles. It seems that Baker was sometimes loosely inspired for his covers on Cinderella’s love by inner stories. His cover for Cinderella Love #15 seems inspired by the inner story The Wall of Wealthand its cover for Cinderella Love #26 is based on the inner story Dreams and disappointmentsfor example.

But it seems that sometimes mistakes or planning changes happened (or maybe they just didn’t care). The cover of Cinderella Love #29 seems to correspond to a scene from the story I was a Campus Tramp of number 28, the previous number. And it was noted that the cover of Cinderella Love #25 seems to have the same theme as the story Mardi Gras Sweatshirt of number 26, the next number.

Since Ernest Chiriacka’s image of Freedom magazine volume 24 #1 was also for a Mardi Gras story, that seems likely. And all of this would also seem to confirm the claims of Fred Robinson and others that Baker had an extensive – and more specifically – a well-organized and categorized reference file. When Baker wanted a reference for a woman bathing in a stream interrupted by a man, he found one. When he wanted a reference for a Mardi Gras romance, he found exactly that too.

The market’s reaction to the emergence of Thisavros #534 was in itself an interesting commentary on the notion of reference and scanning. Although it now seems unlikely that Baker ever saw the Thisavros problem, the idea that this obscure publication sold for $1525.00 on the basis that it was an earlier version of Baker’s famous cover imagery seems to confirm the stature of his well-executed cover as continuing to be an important part of his legacy. It may also be worth noting that the Comic Swipes Facebook group has collected an absolutely incredible number of sample swipes involving historically significant hardware and artists.

Such historical comparisons also make it possible to appreciate the artists who inspired sometimes well-known comics. Chiriacka was a prolific cover and interior artist across a wide range of pulp and slick magazines, ranging from Black Book Detective and Weekly detective fiction at Necklaces, Squireand Saturday night post among countless others. Perhaps relevant to this discussion given the Thisavros connection, Chiriacka was of Greek ancestry, his parents having moved from Greece to New York in 1907. Did this image catch the attention of the editors of Thisavros because of some knowledge of his work? Certainly, it seems obvious that they used a wide variety of sources during this period. Regardless of all that, a review of Chiriacka’s work is well worth your time.

And if you’re a baker collector or even a fan of classic magazine or pasta illustrations like Chiriacka’s work, Freedom magazine volume 24 #1, January 4, 1947 is a good starting point. There is a copy of this magazine inspired by Baker’s famous cover at the August 11, 2022 The Matt Baker Showcase Auction #40190 auction at Heritage Auctions, and given the market valuation of Thisavros #534the auction for the original publication of this image will be interesting to watch.